Consigned from our own personal collection the lot was described as "A SHIP'S NAMEBOARD FROM HMS LUPIN 1916 with brass lettering applied to a wooden banner - 37", together with Lupin’s Warship Week plaque, named to Whitefield, Lancashire and dated 1942”.

HMS Lupin was one of thirty six Arabis Class sloops built by Simons of Renfrew, Scotland, for the Royal Navy Emergency War Programme in World War I. She was a "Flower Class" vessel, sometimes referred to as "Cabbage Class", or "Herbaceous Borders"! She was launched on 31st May 1916 and operated as a minesweeper with the 2nd Minesweeper Flotilla. 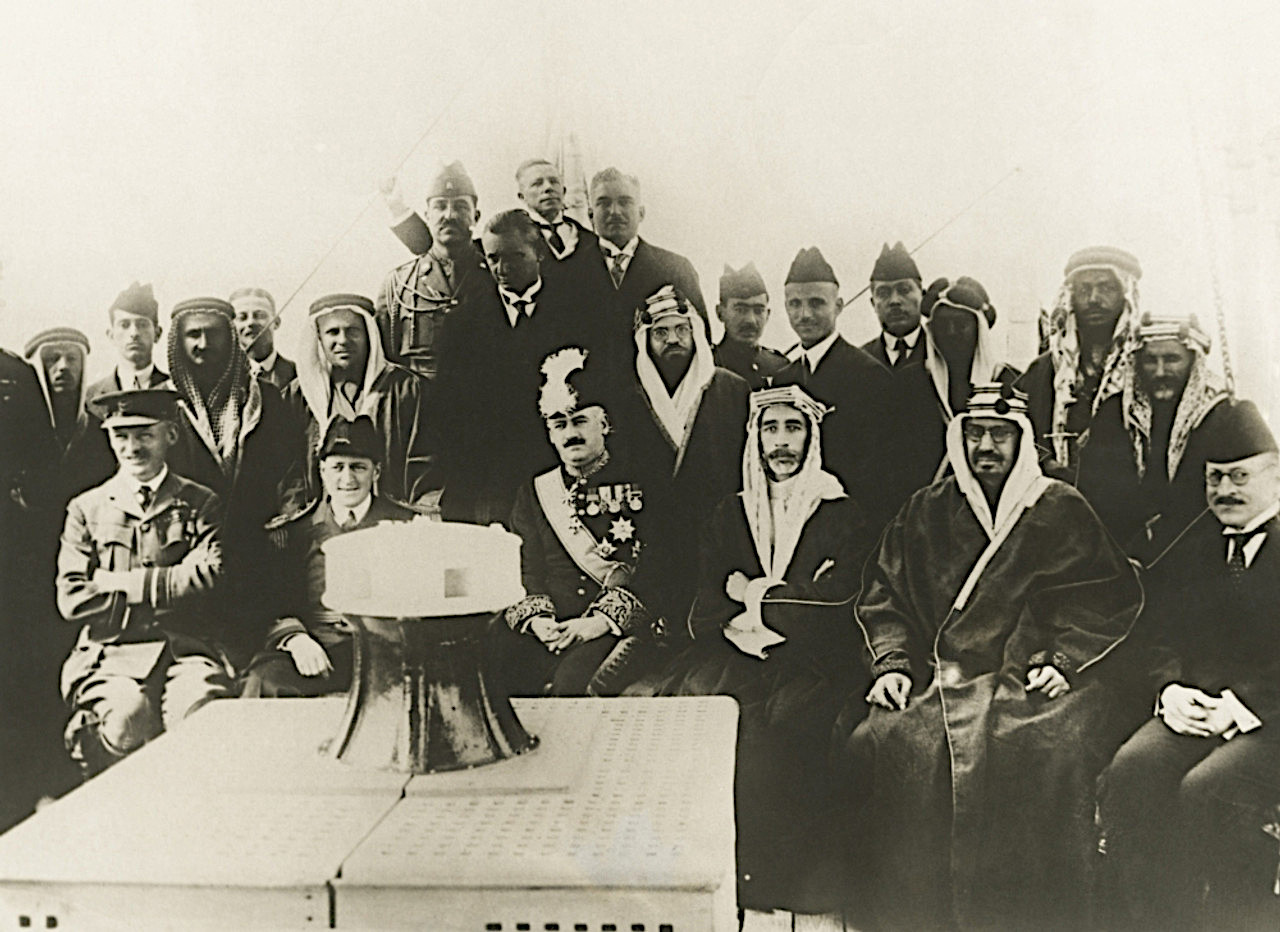 Between the wars HMS Lupin served mainly in the Middle East. Significantly, on February 22nd 1930, she hosted a meeting between King Faisal of Iraq and King Ibn Saud of Najd, where they signed a peace treaty that granted independence to Iraq and Najd.

HMS Lupin returned to the UK in 1936, where she served in a training role, based at Portsmouth.

The nameboard identifies the ship. This one would probably have been mounted on the side of the ship's bridge, or elsewhere on the superstructure.

During WWII the Admiralty raised much needed funds by organising 1,173 Warship Week collections in communities around the country. When the contribution targets were met, each community could 'adopt' the warship. Presentation plaques were issued for display in the community, and also on the associated ship. In the case of HMS Lupin, a Warship Week was held in Whitefield between February 28th and March 7th 1942 - a target of £75,000 was set and duly raised. That was a very significant amount for a comparatively small community, equating to approximately £2.7 million today.

HMS Lupin served out WWII in Portsmouth, then in 1946 she was declared obsolete and sold to be broken up at Porchester.

That would have been the end of her, had it not been for an avid Royal Navy collector called Tom Ferrers-Walker, he had served in the Royal Navy during the war. When he left the service he decided to collect a range of Naval artefacts. During the rest of his life he assembled one of the most comprehensive private collections in the UK. Items were mainly acquired when the ships were sold out of service to be broken up. Initially, he kept the collection at his home, but in around 1985 he loaned it, in its entirety, to the Royal Naval Museum at the Historical Dockyard, Portsmouth. Unfortunately, there it remained in the museum's reserve collection, unseen by the public, who were only available to view by special request. It had always been Tom’s intention to bequeath the collection to the nation for public display. The formalities had not been completed at the time of his death in 2006, so the whole collection was sold on the open market.

HMS Lupin’s original Nameboard and the commemorative adoption plate were acquired by me around this time; since then they have remained in my personal collection. Mr ‘Oldnautibits‘ has now decided that it is time to offer them for sale to a new custodian - this is only the second time that they have been offered on the open market. It is assumed the Warship Week Plaque is the one presented by the community of Whitefield to the ship's company - it would have been displayed on board HMS Lupin throughout her service career. It is unknown if the plaque presented by the Admiralty to Whitefield is still extant, but these would normally have been displayed in the Town, or Village, Hall, or even the Church. 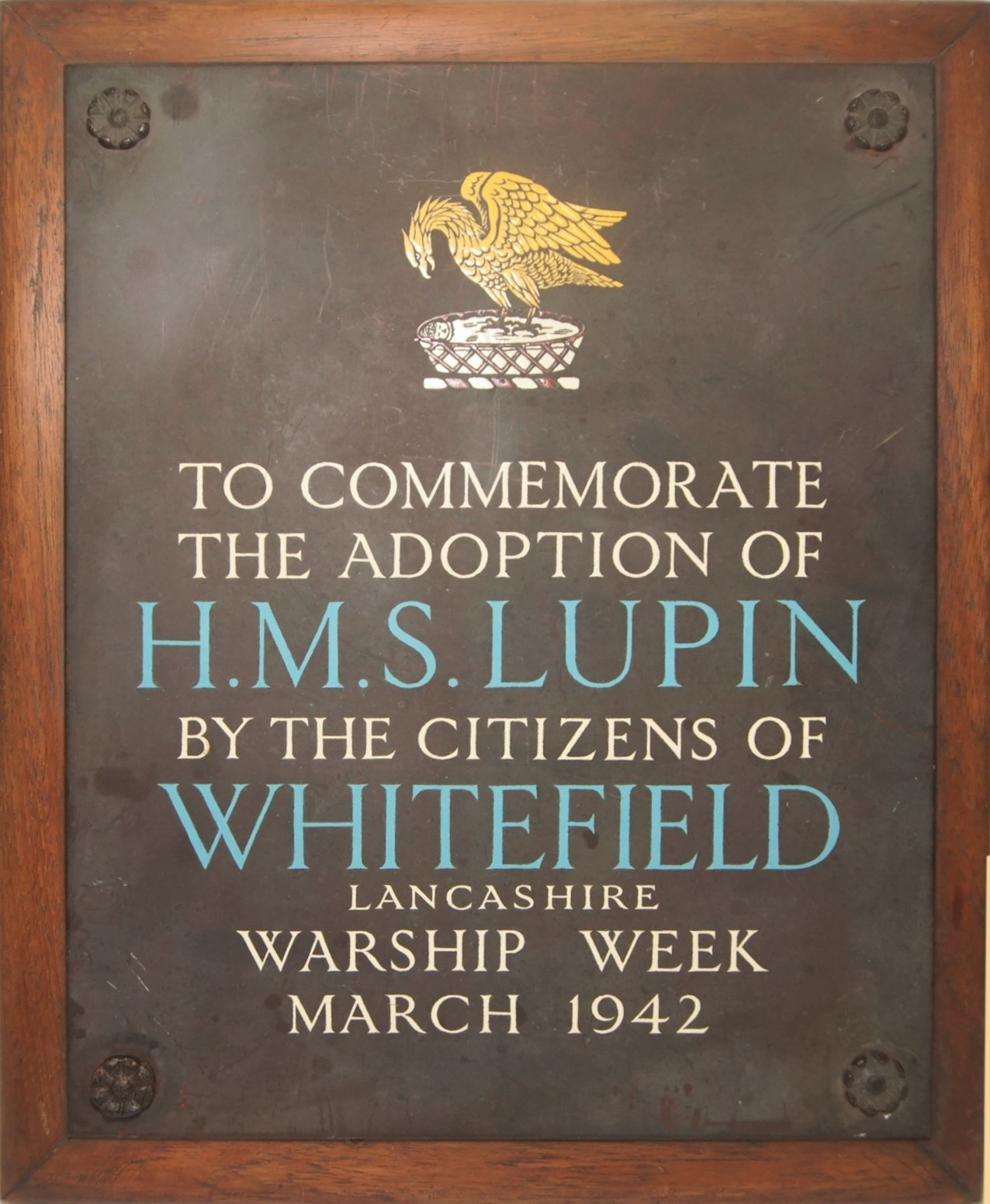 We hope the new owner of these historic pieces of Royal Navy memorabilia will enjoy them as much as we have. If, by chance, you missed the opportunity to bid at the Miller's auction, we have retained the other original HMS Lupin Nameboard, which we also purchased back in 2006 - it would have been mounted on the opposite side of the ship. If you have an interest in adding it to your collection, we may consider re-homing it! Please get in touch via our Contact Us page.