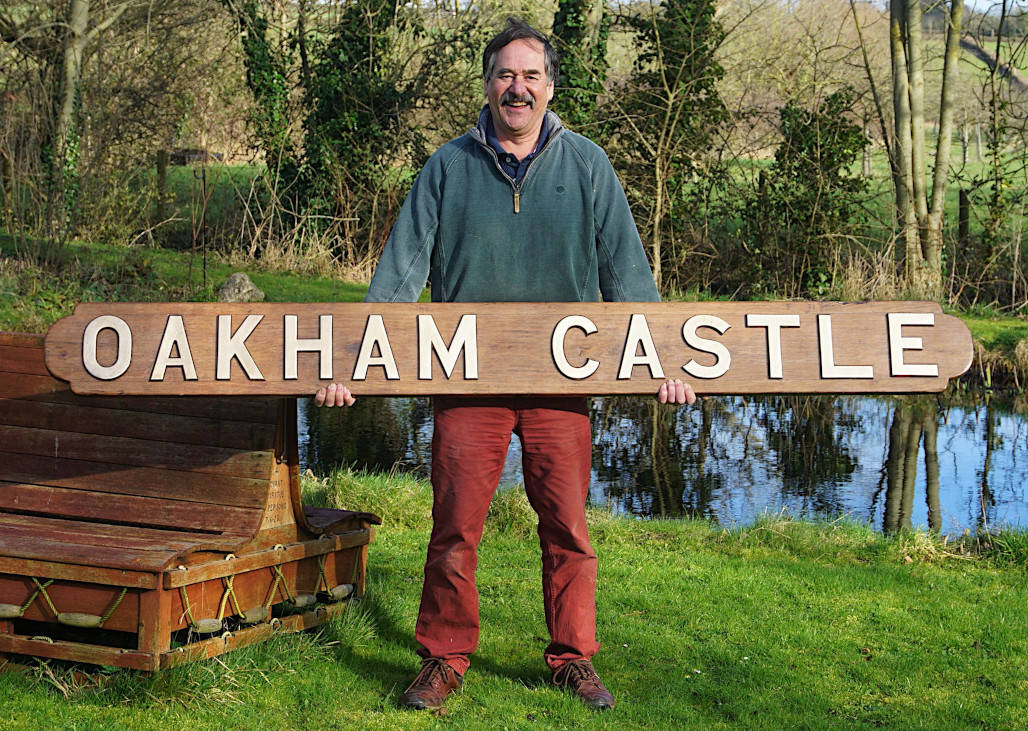 THE HMS OAKHAM NAMEBOARD IS FOR SALE HERE!

As I'm no longer able to display the nameboard appropriately in my own collection, I am reluctantly listing it here on our website in the Nautical - Ship's Fittings page. 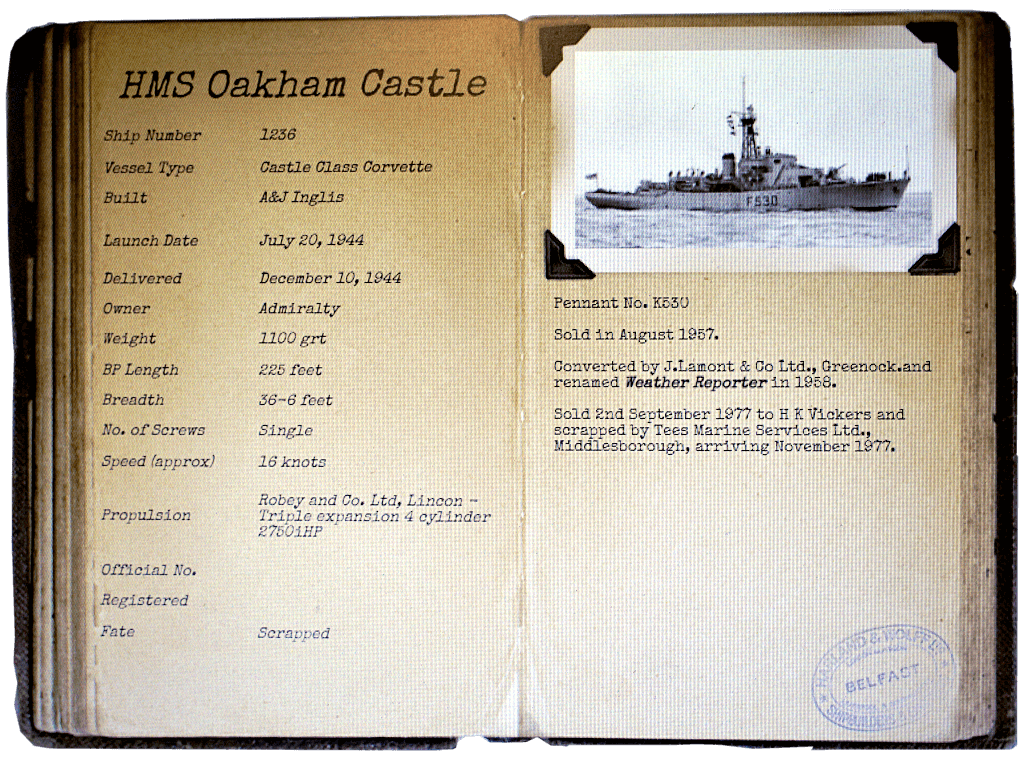 HMS Oakham Castle was a Castle Class corvette - between late 1942 and early 1943 ninety-six were ordered from shipyards in the United Kingdom and Canada. The only ship in the Royal Navy so named, she was built by A & J Inglis of Glasgow, allocated number 1236 and was launched on 20th July 1944, with call sign code MZQN. At 225 feet long, she weighed 1,100 tons, with a maximum speed of sixteen knots.

She served in WWII on convoy escort duty in the North Atlantic, where she managed to dodge Hitler's U Boats and survived the war. In 1948 HMS Oakham Castle joined the 2nd Training Squadron based at Portland Harbour, where she served until December 1950, when she was reduced to reserve, based at Devonport. She was refitted in 1953, but then laid up in a preserved condition at South Shields until 1957, when she was transferred to the Air Ministry. On 16th May 1958 she was renamed Weather Reporter for service with the RAF as a weather ship. 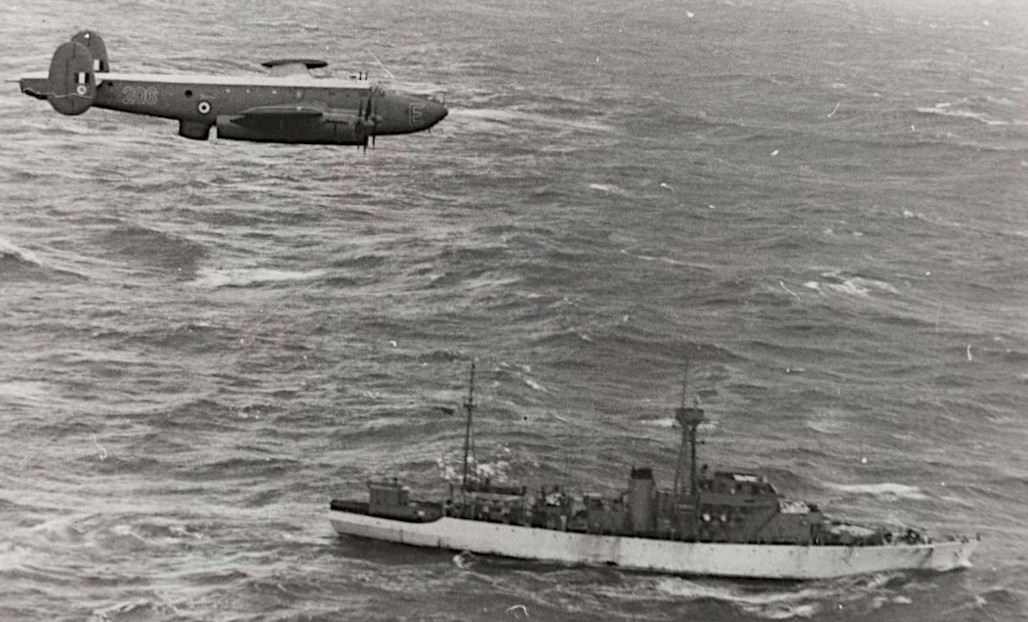 RAF Shackleton attempts to drop Christmas parcels for 'Weather Reporter' crew 23.12.59. Due to mountainous seas 600 miles out in the Atlantic the attempt had to be abandoned

Finally, in November 1977, after thirty-three years, she was withdrawn from service, and scrapped at Middleborough. Not many ships can say that they served with both the Royal Navy and the RAF, however HMS Oakham Castle/Weather Reporter certainly has that possibly unique honour!

This original nameboard (one of two the ship carried) was acquired by Tom Ferrers –Walker, who served in the Royal Navy in WWII. When he left the service, he decided to collect Royal Navy artefacts. He spent his retirement assembling one of the most comprehensive private collections of Naval memorabilia in the UK and probably the world.

In the period after World War II many items were acquired directly by Ferrers-Walker from ships which were sold out of service prior to being broken up. He continued his hobby right up until the 1990's, sourcing items from public auctions and private collections. His memorabilia was originally kept at his home, then in about 1985 he loaned his entire collection to the Royal Naval Museum at the Historic Dockyard at Portsmouth. Unfortunately, it remained in the museum's reserve collection, mainly unseen by the public and was only available to view by special request. It had always been Tom's intention to bequeath his amazing artefacts to the nation for public display, but sadly the formalities were not completed by the time of his death in 2006. His family decided to break up the collection, which was sold in its entirety on the open market and dispersed. 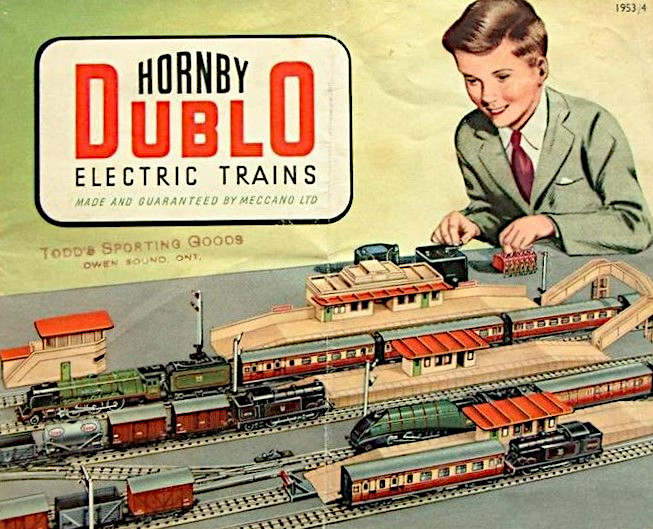 My interest in this nameboard emanated from being a "Rutland boy", having grown up in Uppingham in the 1950's and 60's, where my late father was a housemaster at Uppingham School. Our family often visited Oakham in those long-lost summer's days as Dad played cricket for both the 'Pedagogues Cricket Club' (made up entirely of school masters) and also the 'Gentlemen of Leicestershire Cricket Club' (known in cricketing circles as The Leicester Gents). I have happy memories of picnics on the Oakham cricket ground, listening to the sound of leather on willow. Oakham in those idyllic days was much quieter than it is today, with little traffic and the old-fashioned charms of what now seem like time warp stores, such as the upmarket drapers and department store 'Furley & Hassan' in the market square, established around 1880. The railway was a further attraction and I remember the excitement of watching the steam trains billowing smoke as they roared by. Opened in 1848 it is today the only remaining station in Rutland and the metal footbridge (circa 1901) with the level crossing beneath, provided the ideal viewing platform for one small boy, who like so many in the 1950's enjoyed a 'Hornby 3 Rail' train set at home. 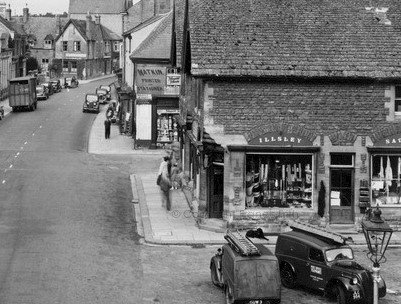 As a youngster, by far the most exciting shop, which I always had to visit "de rigueur", was the saddlers and gun shop 'Illsleys'. It was situated on the High Street adjacent to the Market Square and entering 'Illsleys' was tantamount to visiting a Christmas grotto for other children of my generation. Even today, sixty years on, I can still savour the powerful aroma of fine vegetable tanned leather and the racks of shotguns and rifles, which exuded the unmistakeable aroma of 'Youngs 303 Gun Oil' by Parker Hale. These hugely evocative sensory memories linger on, as if they occurred just yesterday. 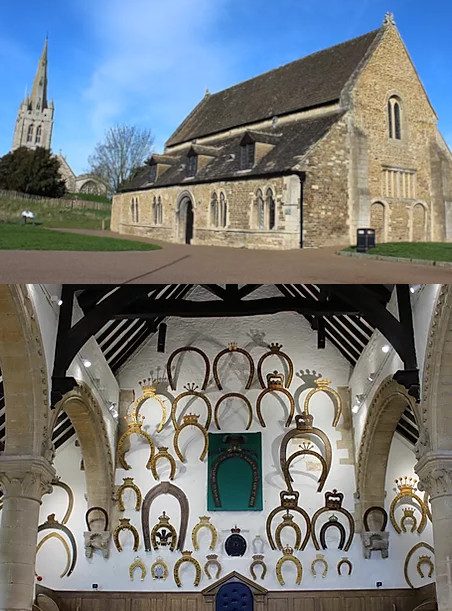 The other Oakham Castle. No castellations, but plenty of presentation horseshoes!

A visit to the namesake Oakham Castle, with its mass of oversized upturned horseshoes, was also a special treat. "Castle" to a small boy seemed something of a misnomer, in view of the building's modest size and lack of castellations! This however takes me full circle and nicely back to the HMS Oakham Castle nameboard, which is the reason for this nostalgic trip down memory lane! When I spotted it for sale in 2005 in the West Country where I now live, it brought flooding back memories of the county I loved during my formative years. It had to be mine and after some negotiation, it was duly secured and displayed with pride in our Somerset cottage. Times however move on, so after seventeen years of ownership and with a new design scheme for our kitchen, it is finally time to find a new owner. 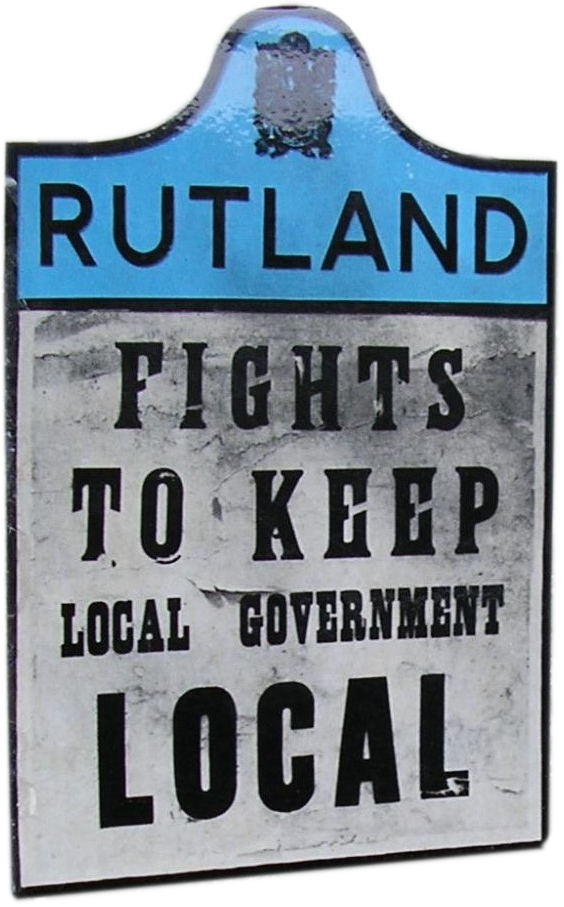 It seems entirely appropriate that the next custodian should perhaps reside in England's smallest county, a distinction it nearly lost in the early 1960's. I clearly remember the campaign when all the county signs had additional notices posted beneath reading 'Rutland Fights for Minority Rights' and 'Rutland Fights To Keep Local Government Local'. The campaign, circa 1961, was adopted by the late Sir Kenneth Ruddle, then chairman of Rutland County Council, eventually delivering the result that Rutland wanted and Leicestershire was kept at bay!

It would be nice to hope that our board might end up in the public domain, where it could be enjoyed by the many rather than a few. Online research indicates the obvious place would be Oakham's Rutland County Museum, but it appears that they are ahead of the curve, as they have already secured the matching board from the opposite side of the ship.

THE HMS OAKHAM NAMEBOARD IS FOR SALE HERE!

As I'm no longer able to display the nameboard appropriately in my own collection, I am reluctantly listing it here on our website in the Nautical - Ship's Fittings page.

Specialist London based marine auctioneers, Charles Miller Ltd, have estimated its worth in the current market to be £600-£800, plus, in their case, the auctioneer's commission. This does not seem a huge price to pay for this impressive piece that has a distinguished provenance; having served with the Royal Navy in WWII, and then post-war with the Air Ministry/RAF.

As its pair is already in public ownership, this is a one-off opportunity, never to be repeated. We are pricing at Millers midway estimate of £700 - with nothing more to pay other than delivery cost. It would make a unique Christmas present for the marine collector in your life, although due to its size, festive wrapping may prove challenging!

It's very much hoped that it too will end up back in the County of Rutland, and what better place for it, as Rutland's motto "Multum in Parvo" translated means 'A great deal in a small space', which accurately describes our historic 1944 nameboard! 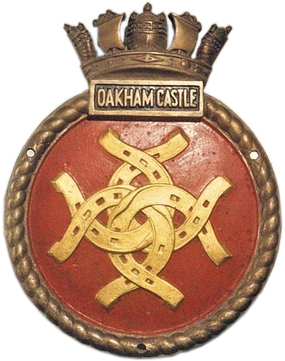 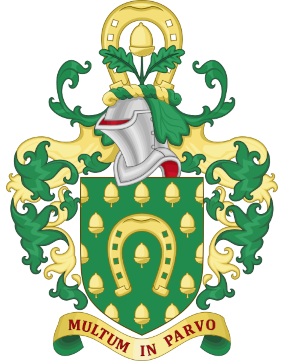 Rutland motto, adopted by the county in 1950, 'A great deal in a small space'